With the help of The Hiring Engine, Alliance Beverage has  time to focus on what matters: their people. 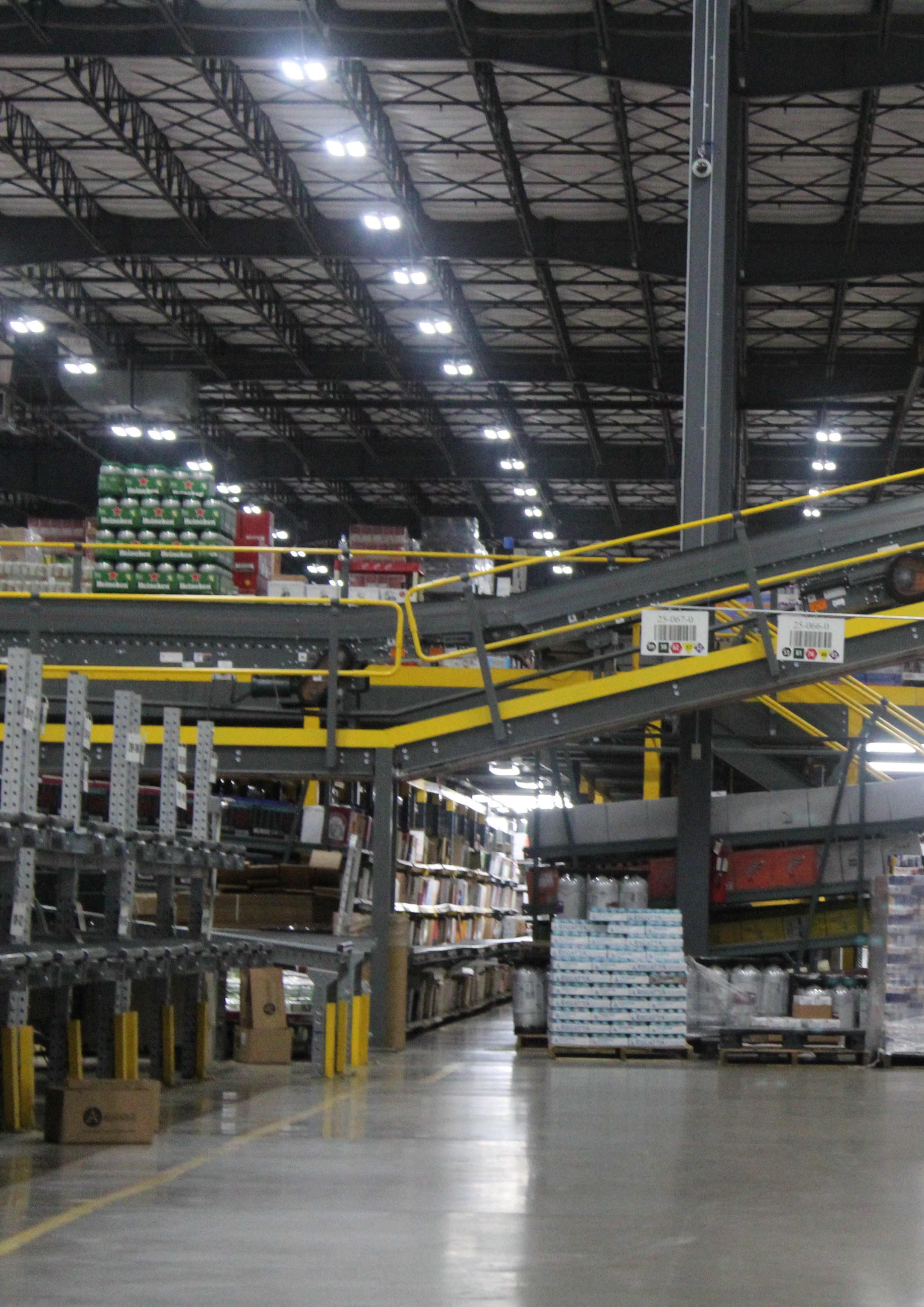 Alliance Beverage Distributing does business all over western Michigan. In business since 2013, Alliance has 3 distribution facilities, 5 sales offices, over 400 employees, and more than 5,000 customers across Michigan. Since the beginning, Alliance has been committed to the highest standards of performance and this commitment translates into hiring the best people.

Brandy, Susan, and Meaghan make up Alliance's core HR team, overseeing everything from benefits to new hire training. In addition to everything non-hiring related, they work together to fill positions across the state, from Petoskey to St. Joseph, Michigan.

Overall, the three of them are responsible for recruiting drivers, merchandisers, salesmen, maintenance technicians, and a mix of other employees. Every job has different requirements and needs, so each position needs to be dealt with in a unique way.

Since Alliance's inception, the job market has gotten more cutthroat and fast-paced. With such a competitive environment, Alliance found that they needed to make their hiring process faster and more engaging in order to fill the huge volume of open roles. The need to fill jobs grew to a point where the HR team ended up spending almost all their time trying to chase down those few strong candidates in a sea of unqualified people. Alliance began losing its faith in traditional hiring practices and old outreach techniques.

Before The Hiring Engine

Every year, the HR team would run into the same issue. Though they hire year-round, they ramp up in the summer for their busy season, starting in May and lasting through Labor Day. At the start of August, all the college students go back to school, and by September the lack of new hires left distribution facilities short-staffed. Hiring is a difficult process, and filling dozens of positions in just a few months was taking them a momentous amount of effort. With only three employees reviewing candidates for over 45 jobs, Alliance inevitably had massive piles of resumes to work through. As Brandy describes it, "hiring is constant ... we were spending 90% of our time just getting candidates in the door". Simply, there were just too many open roles.

Hiring is constant ... we were spending 90% of our time just getting candidates in the door

Despite spending thousands of hours a year looking at candidates, it wasn't always easy to quickly tell if someone would be a good fit. Before The Hiring Engine, the HR team at Alliance relied almost entirely on hiring sites like Indeed and Michigan's unemployment board to bring in people. Indeed would produce hundreds of applicants, but only a few of the applicants would be qualified. At the same time, Michigan's job board allowed employers to search for specific licenses and certifications, but oftentimes the individuals from those boards were only listed there because they had to be. Occasionally, applicants from the Michigan board and Indeed would apply just to fulfill unemployment requirements instead of out of an interest in the position. Situations like these were disappointing and almost impossible to detect from just a resume.

Not only was reviewing applications taking up precious time, but Alliance's methods of reaching out to candidates and sharing applications weren't able to scale along with the company. Every day, Brandy would go into Indeed, print out all the applications, see if there was any overlap between online applications and physical resumes, then write down the date she called each candidate on a piece of paper. Unless Susan or Meaghan saw that written note about the candidate, they would have no idea if someone had reached out yet, or if they were doing the same work twice.

Beyond risking redundancy in the process, it was time-consuming to share applications across different departments. Susan and the others had to download an applicant's resume, write up some context, and send the email with the resume attached to the departmental hiring manager. Alliance knew there must be a better way.

Getting started with The Hiring Engine

Instead of spending another year trying to keep up with the massive volume of jobs they needed to fill, Alliance brought on The Hiring Engine to revolutionize their hiring practices. As a result, Alliance has filled dozens of positions for a fraction of the cost and time it took before.

Susan and the rest of the Alliance team no longer have to worry about crossed wires when reaching out to applicants. With the All-In-One messaging platform, all outreach to an applicant over email, call, or text is there for everyone to see. Instead of calling an applicant time and time again, Susan and everyone on the HR team is able to reach out in under 10 seconds.

This ability to hear from job-seekers right away sold Susan on The Hiring Engine. Originally, she would have to look for her notes on a candidate, make sure to mark them in Alliance's hiring spreadsheet, and then hope they answered the phone when she called. By adding in text messaging, she was now able to reach out to dozens of applicants and hear back from them just a few minutes later. As Susan puts it, "Texting has saved me the most time, I no longer have to call people that just aren't going to answer".

It was frustrating for her when a candidate wouldn't reply, and it can be equally disheartening for a candidate when they don't hear back about a position. The Hiring Engine enabled Alliance to prioritize the conversations that need follow up, while also keeping applicants engaged in the process with automatic messages.

In The Hiring Engine, Alliance can choose to reach out to candidates any way they like - from drafting emails to sending texts - all in one place. The Hiring Engine reaches out to people the way they prefer, and will automatically switch to email when an applicant doesn't want to be reached via phone.

Not only is every text message and email there to see in order, but it also gives Meaghan the privacy she needs when the workday is done. For every new job that Alliance creates, The Hiring Engine buys a local phone number that it uses to send texts and make calls, instead of forcing her to use her own cell phone. In her words, "we live in a texting world, and I like that you don't have to use your own phone to text people". Not only does it work for texts, but you can call applicants right though The Hiring Engine as well. Say goodbye to unwanted messages and calls after hours!

We live in a texting world, and I like that you don't have to use your own phone to text people

Saving Time for Their Staff by Automating Routine Hiring Steps

By automating initial outreach to candidates, The Hiring Engine has given Alliance's HR team time to focus on what matters: their people.

Susan used to spend incredible amounts of time just trying to get a hold of those few promising job-seekers. As she puts it, she "could spend an hour, easily,  just sending voicemails".  Now, that hour can be better spent interacting with qualified and responsive candidates who have already engaged with The Hiring Engine's automated messages. With The Hiring Engine’s responsiveness screening step, the three of them only see applicants that are engaged and enthusiastic about the position. For Brandy, "It's nice to see when an applicant is actually responsive, instead of just hitting apply".  Brandy no longer has to wait until the interview to see if a candidate is actually invested in the job, The Hiring Engine's automatic interest confirmation messages instantly gets her the answer.

Beyond confirming work history and tracking candidate responsiveness, The Hiring Engine sends confirmation messages to candidates the day before and two hours before their interview, reducing the number of frustrating no-call no-shows that Alliance experiences. Every automated message can be tweaked, giving Alliance the freedom to know that every automated text or email that goes out fits their company culture.With so much to do, sometimes you can only review a few people. As Brandy puts it, "If I only have the time to review 5 or 10 people, I would like the best to be right in front of me". Instead of showing candidates chronologically, The Hiring Engine compiles and screens all the applications before they get to Alliance, sending them the highest quality candidates for the least amount of effort on their end. The Hiring Engine ranks candidates based on their qualifications and experience, ensuring that the first applications Brandy and the others see are the best.

Staying Organized with The Hiring Engine

Despite having dozens of roles to fill and constantly changing schedules, The Hiring Engine has helped keep Alliance on track. Gone are the days when they relied on institutional knowledge and post-it notes to tell each other how far a candidate is in the process. Now, everything can be found with the click of a button. Every job has its own candidate pipeline which organizes candidates into how far they have made it in the process. If Brandy is out sick, Susan or Meaghan can jump in and easily continue any conversation, giving them the ability to keep the momentum going and hiring on track.

On a daily basis, the three of them will send out resumes to the hiring managers. The Hiring Engine lets any user add comments to an applicant's profile, that way they can keep track of what they have done with a job seeker's resume, how they each feel about them, and what the next steps are.

Customer Success on a Personal Level

Alliance has been able to see first hand how responsiveness and a dedication to improvement has helped them speed up their hiring process. As Susan puts it, "any time I think of something we need, I shoot you guys an email and you address it in 15 seconds flat". The quick turnaround allows Alliance to improve the performance of their jobs across every platform, from optimizing Facebook ads to honing in on the necessary experience for finding qualified applicants. Direct, personal assistance from The Hiring Engine gives Alliance's HR team room to breathe and room to strengthen their company.

Any time I think of something we need, I shoot you guys an email and you address it in 15 seconds flat

The Hiring Engine has become Alliance Beverage's sole hiring platform because of its innovative means of communication and ability to completely automate basic hiring practices, giving them a competitive edge.

Looking to the Future: Putting Priorities in the Right Place

Brandy, Susan, and Meaghan feel confident that The Hiring Engine has given them a solution to filling their numerous positions painlessly. Their efforts are now solely focused on only the best applicants, and Alliance as a whole can focus on the future.

To learn more about Alliance, visit their website and be sure to try one of their 100s of beers they distribute. If you know anyone interested in joining their great team, they can apply here.

See How We Can Help Your Company